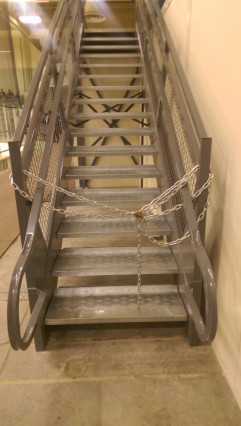 So, over the weekend, while I was waiting for my wife’s hockey game to begin I was exploring the facility. I saw an upper level and I was curious if it was open. But alas no, it was locked. And I mean locked. Above is a photo of the chain and lock used to keep people out.

There’s a saying that locks only keep out honest people. That’s not entirely true, but there’s some truth to that. Security, especially in my field of IT and databases is extremely important. I am often working with data that contains private information about people. I have to take steps to keep it safe. So, as I mentioned in Too Secure, I don’t have a problem with security per se. There I talked about security that prevented me from doing my job.

Here we have the opposite. Making something that look secure, but really isn’t. I mean this has a heavy chain and a lock. I’m not sure who did this or why, but I’m sure they felt the lock was important. It’s not a cheap one either.

This is a case where probably a simple sign and string, “Balcony closed” would have sufficed.  The only purpose the lock really had was to make sure the chain wasn’t stolen. The purpose of the chain appeared to be to give something to attach the lock to.

Now, sure, someone could have removed a sign and string and said, “oh we never saw it” but again, what’s the ultimate risk if someone got upstairs? It was simply an observation balcony. They weren’t really securing much.

But I’m sure someone felt good about their security.

So, when you’re making something secure, stop and make sure you’re spending your time wisely. Sometimes not everything needs the most secure system available. Sometimes a “keep out sign” might be enough and easier.